It’s Not Too Late to Name our Snake!

Posted on September 12, 2012 by Friends of Murphys Point

You can still join the fun(draiser) and take part in the contest to name the captive Gray Ratsnake housed at the Visitor Centre at Murphys Point! This fellow has been educating and delighting park visitors for years, but he’s never been given a name. 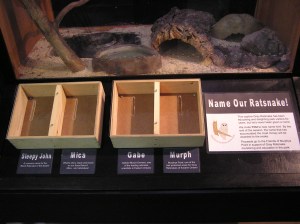 Cast your vote in the Visitor Centre at Murphys Point!

You can have your say right up to Thanksgiving. By the end of the season, the name that has accumulated the most money will be awarded to the snake. Proceeds go to the Friends of Murphys Point Park in support of Gray Ratsnake monitoring and education in the park.

A shortlist of 12 names has been pared down to these four:

Sleepy John (apparently a common name for Black Ratsnakes in the South) Mica (both found at Murphys Point; both black and shiny) Gabe (after ratsnake scientist Gabriel Blouin-Demers – who is also in the Friends’ ratsnake video) Murph (since Murphys Point is one of the last protected areas for ratsnakes in Ontario)

Get in on the fun and cast your vote! Drop by the Visitor Centre, which is open on Saturdays from 1 to 4 p.m. up to Thanksgiving. See displays about the park’s nature and cultural heritage. Check out our live Ratsnake display – the snake comes out at 2 p.m. for a short demonstration.